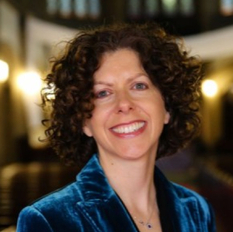 Nicole Becker is Artistic and Executive Director of Every Voice Choirs, a program of children’s choirs currently in residence in the Program in Music and Music Education at Teachers College, Columbia University.  Dr. Becker also teaches applied piano, voice, and choral conducting at Teachers College.  A native of New York City, Dr. Becker received an undergraduate degree in Biology from Yale University, a Masters of Music in Piano from Indiana University, and a Doctor of Education from Teachers College, Columbia University.  Dr. Becker has performed internationally as a pianist and soprano and has taught music at the elementary, middle school, and college levels.  Her current research focuses on the challenges and opportunities offered by student-centered pedagogical approaches in ensemble settings.
On the Ark, Two by Two, Creatures (and Performers) Great and Small:
A Narrative on Interpreting a Project
I borrowed the first part of the title of this paper from Anthony Tommasini, the arts critic for the New York Times; it was the title of his review of a production of Benjamin Britten’s opera Noye’s Fludde, that took place in November 2013.  I participated in the production as the co-director of the children’s choir.  It was a collaborative project spearheaded by Lighthouse International, an organization that serves people with vision loss.  More than half the cast was visually impaired or blind.  As Tommasini recounts, the production was a tremendous success.

Throughout the production process, which touched me, and apparently everyone who participated, deeply, I sought to put my finger on the source of its magic.  What was it about the way we brought children who were visually impaired together with children who were fully sighted in this collaboration that made all the children describe it as a “once in a lifetime opportunity?”  I interviewed the children and several of their parents as well as leaders of the project, seeking insights that might have value to others seeking to embark on similar collaborative projects.

Describing magic, however, is not a scholarly exercise.  As I reveled in my memories and those of the overwhelmingly positive interviewees, the scholar within me urged me to seek a more critical lens.  I turned to friends who analyze discourse.  “Is it possible that am I reifying entrenched notions of disability and thus propagating an ‘ocularcentric and abelist perspective that defines people with impaired vision as inferior to people with unimpaired vision?’” (Bolt, 2005; Abramo & Pierce, 2013) My own work in autoethnography, informed by poststructuralist approaches to narrative, reminded me to look beyond a single, “rosy” story of transformation (Miller, 2005) and to try to see how that narrative was a product of the discourses that shaped my writing of it.

A social constructivist framework commonly referred to as the “social model of disability” (Abramo & Pierce, 2013) offered a lens to trouble my rosy story.  As Abramo (2013) describes, this approach views disability as a construction of social relations that marginalize those with bodies that are considered different from the norm.  As Linton (1997, cited in Abramo & Pierce, 2013) describes,

"The medicalization of disability casts human variations as deviance from the norm, as a pathological condition, as deficit, and, significantly, as an individual burden and personal tragedy… The disability studies’ and disability rights movement’s position is critical of the domination of the medical definition and views it as a major stumbling block to the reinterpretation of disability as a political category and to the social change that could follow such a shift."  (p. 11)

In a sense, this was exactly what I was looking for: a perspective that could trouble the discourses that shaped my rosy interpretation of my own experience and my interpretations of the interview data.  As the teacher and collaborative artist who had participated in the project, however, this perspective seemed to obscure or deny the very qualities of the experience that were the most salient for everyone who participated: Many of the children involved in this project and their families did experience an individual burden and personal tragedy associated with their vision loss.  Much of the poignancy of this project seemed to be located in the fact that these kids had overcome that tragedy.  A perspective that rendered acknowledgment of the very real challenges faced by these visually impaired kids taboo necessarily obscured the source of the profound impact the project had on everyone who participated.

For me, interpreting what happened during this project required both an eye critical to discourse and an honest attempt to capture the lived experience (Von Manen, 1990) of those who participated.  This exercise in interpretation brought contrasts between poststructuralist and phenomenological approaches to narrative into stark relief, and my effort to position my interpretations between these two approaches itself became a counternarrative to my story of the musical collaboration among sighted and visually impaired communities in Noye’s Fludde.